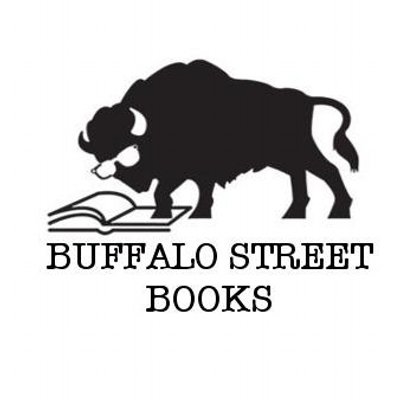 The October 21, 2016 edition of The New Yorker features an article by David Sax entitled: “What Barnes & Noble Doesn’t Get About Bookstores.” Sax chronicles the chain bookseller’s struggle to compete with Amazon, and explores the company’s efforts to rebrand and adjust their aging superstore-centric business model. “Barnes & Noble is stuck in the middle,” he suggests. “A giant saddled with hundreds of huge stores, and an image of corporate sameness in a market that has increasingly come to treasure defiantly independent bookstores.” Barnes and Noble plans to open a series of smaller, strategically placed stores that will mimic the look and feel of such beloved local establishments, but Sax is skeptical that this strategy will work, noting, “the independent bookstores that have proved successful are uniquely suited to the community they’re in.” The crowd that gathered at Buffalo Street Books (BSB) in Ithaca New York on Saturday, November 5th, 2016 for  readings by poets Ocean Vuong and Sally Mao, confirms Sax’s point. The modestly-sized, L-shaped store was packed. People in the back couldn’t see the speakers, yet listened attentively. Many in the audience expressed astonishment that the event was so highly attended, as well as pride in the fact that their local bookstore had become a true community hub. Beyond being Ithaca’s only independently-owned seller of new books, BSB is a cooperative, and thereby offers patrons a unique chance to become immersed in the thriving literary culture that the store both anchors and promotes.

But as recently as 2011, BSB was in dire straits. The store had opened in the early 80’s and, given the new forces evolving back then against privately owned bookstores, it’s a wonder that the previous owner, Gary Weissbrot, held out as long as he did. By late 2010, Weissbrot was ready to throw in the towel. That’s when “one of Gary’s staff, Bob Proehl, came up with the idea to do a community buyout,” Asha Sanaker, General Manager at BSB, tells monologging.org. “Organizing it as a co-op was the next step in the process to solidify the organizational structure and (to) make clear what the owner’s relationship to the store would be,” she explains. Town members rallied to the cause of saving a local treasure, but also did so out of excitement for a chance to reinvent the book store with a novel mandate to serve the community. 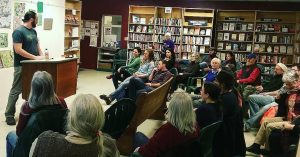 According to BSB’s website, shares in the store still can be purchased, either for $250 up front or on a ten-month installment plan. Owners receive voting rights on policy-level decisions related to the co-op and can run for a position on the executive board. “They are also entitled to a year-end patronage dividend, a portion of the cooperative’s yearly profits based on the individual owner’s patronage throughout the year,” the website states. Further, owners enjoy special events, exclusive product offerings and valuable discounts.

How does the store’s co-op status change the game? “Theoretically, it makes us less dependent on profits,” Sanaker explains. She admits that bookselling  is a low-margin industry and that privately owned stores are unlikely to sustain substantial profits. For that matter, “it’s easier to bear the burden of that financial reality collectively,” she says. “As a group, the owners share both the risks and rewards, (and) the store is not any one owner’s livelihood and legacy.” Without the pressure to garner sizable profits, Sanaker is liberated from traditional business constraints and able to set progressive priorities when it comes to providing for the bookstore’s staff and clientele. “The goal right now is to break even consistently.” She says. “If we’re keeping inventory coming in, people employed at a livable wage, and events happening, then breaking even is enough.” Indeed, this mission statement sounds uniquely suited to a community like Ithaca, home to two universities. Ithaca’s progressive attitudes concerning fairness to workers, its highly-educated community of readers, a strong interest in participation at literary events and its community-wide, universal appreciation of a truly good book, make this town fertile ground for a cooperative-model local book store. 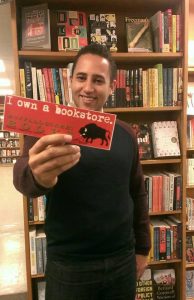 BSB’s survival and the community support it has stirred is, in fact, an act of resistance. Co-op members recognize that on-line companies and “big box” stores like Amazon and Barnes and Noble are predatory. These mega-corporations stubbornly disregard the human ingenuity and artful intellectual property crafted in books, counting published works as merely bulk merchandise, thereby denigrating the art form in their pursuit of profits. Worse, corporate booksellers treat books as a base commodity, building marketshare with ultra-thin margins, while squeezing writers. A store like Buffalo Street Books offers writers and readers a welcome alternative. “We work with authors who are both nationally and self-published to provide a platform for them to share their work,” Sanaker details the store’s commitment to integrating literary communities and generating discussion. “As self-publishing takes over, more and more of the book industry, independent bookstores become…essential to the way that writers get themselves out there,” Sanaker says. BSB, for that matter, maintains a well-stocked shelf of works by local authors, selling their work on consignment, and the store hosts regular readings, granting authors—engaged in an otherwise very solitary type of creative work—the opportunity to connect with readers and receive face-to-face feedback. “For both the attendees and the writers, it comes down to human connection, which is the heart of all co-ops,” Sanaker stresses. She suggests that “as our world becomes increasingly digital, people crave the opportunity to connect with (creatives). It sparks their souls, and encourages them in their own creativity,” she says.

Determining the true value of a book beyond its printing cost is eternally elusive, and as products for consumption, books have always presented a philosophical quandary for consumers. Depending on the individual tastes and dispositions of the reader, content can be perceived as revelatory, inspirational, imaginative, or even incendiary. A solitary reader’s unique reaction to the content he/she reads bears credence to author and critic, Edmund Wilson’s time-honored statement: “No two persons ever read the same book.” The cognitive dissonance that separates each person’s reading experience seeds his or her desire to connect with other readers and to reflect on the virtues, shortcomings and meaning of works read in common. This conversation requires a host, and brick-and-mortar establishments like BSB facilitate not only the transaction of books but also a dedicated contemporary dialogue. BSB’s pilot co-op model, therefore, injects the invaluable element of human capital into the book economy, both increasing the face value of book content and enriching the lives of people who trade in this currency, on a spiritual level that can’t be denominated in dollars and cents. 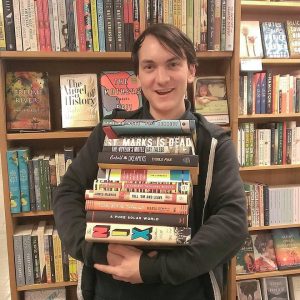 Therein lies the magic that compels communities to treasure their local independent bookstore. BSB is an example of the “human-scale” that Sax suggests Barnes and Noble must aspire to, if it also is to survive. The Co-op model is not without its difficulties. “We’re still affected by the realities of the local economy and the industry as a whole,” Sanaker acknowledges. Managing shareholder expectations when it comes to evaluating the co-op’s successes and failures is also challenging. “I report on the financial status of the co-op to the board every quarter, and to the ownership every year, in person and exhaustively,” Sanaker details her role. “When making decisions I have to be prepared to explain them to a whole host of people who aren’t necessarily business people, and I have to take their needs and desires into account.” Some may argue that having so many people involved and invested renders BSB less flexible and unable to adapt to new market realities in a timely manner, but Sanaker relishes the co-op’s transparency. “I think it also makes us more connected to our community,” she says. “We invest in educating and involving (shareholders) and they, in turn, invest in us by shopping here.”

Looking to the future, Sanaker is conscious that to survive, BSB must still increase foot traffic through the store and augment sales. “That’s going to mean diversifying our inventory to include more high quality sidelines (gifts that offer higher margin) and expand our offerings,” she says. One thing she admits Barnes and Nobles probably got right in their model, is the attribute of including an in-store cafe that encourages people to treat bookstores as a meeting place where they can linger and comfortably read. Ideally, she’d like to relocate the store to Ithaca’s famous Commons, stay open later, and for the store to include a licensed bar. “I think in a town like this folks are looking for a comfortable, engaging place to hang out, share a drink and conversation, without fighting the regular college bar crowd,” Sanaker observes. With resounding local spirit, she suggests that “being able to come hear your favorite author while also having a glass of Finger Lakes wine is a dream experience for many (Ithacans).” Ithaca is a uniquely diverse place where the motto Think global, eat local noticeably influences the missions of stores as well as the habits of consumers. Regardless of how the book market continues to evolve in the daunting digital age, it’s fair to say that Buffalo Street Books has provided a sound alternative to what Sax has labeled “corporate sameness.” Similarly, the co-op’s community of authors and readers who have united to pursue this project also offers a proud example for how human connection elevates and revitalizes the exhilarating exchange of ideas that books and bookstores were always meant to promote. As Barnes’s and Noble has only recently discovered, there’s something undeniably refreshing about getting back to the basics.