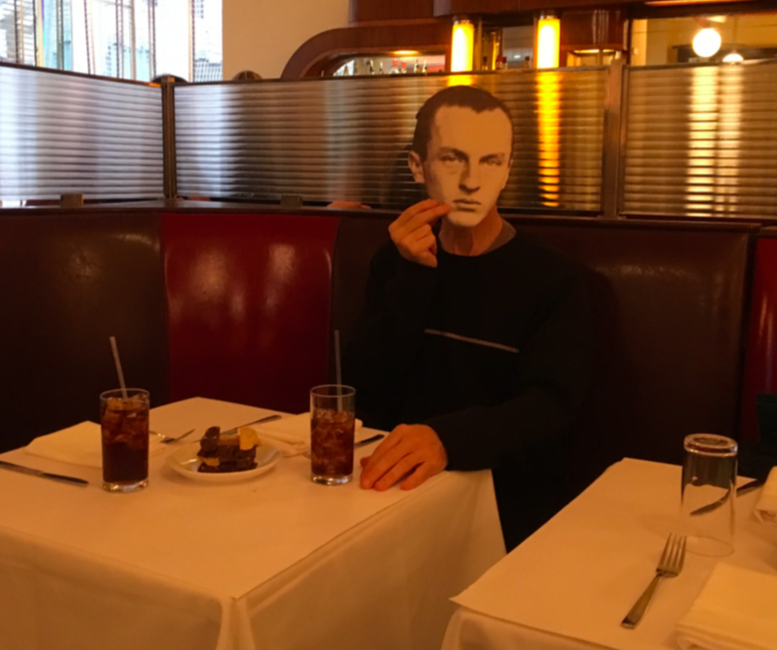 “Frank Having A Coke”

Having a Coke with YOU, Frank

In 1978, the artist David Wojnarowicz began taking a series of photographs of a man wearing a paper mask bearing the face of Arthur Rimbaud. I saw these photographs for the first time at his 2018 Whitney Retrospective: History Keeps Me Awake at Night, and instantly knew I had to copy him. I had to take my favourite poet, Frank O’Hara, to all my haunts in New York, to see the City through his eyes and to see him in my eyes.

Frank O’Hara and David Wojnarowicz turn out to have quite a few things in common, not least their mutual love of Rimbaud, a joyous fluke. Both died cruelly young – O’Hara at 40, Wojnarowicz at 37 – both lived in the East Village and both enjoyed roaming the streets in search of inspiration and adventure, often sexual, perhaps the same thing for the romantically inclined.

Once I began photographing my beloved poet around Manhattan, the exercise quickly became very moreish. I could see why Wojnarowicz kept going on and on, ending up with an estimated 500 negatives in only one year: Rimbaud in a coffee bar, on a subway, walking around the Meatpacking District, wanking. But why stop there, what about jacking up, urinating, and even reading a newspaper? Yes, I thought, why waste time going anywhere without them?

Wojnarowicz initially created a narrative structure around Arthur Rimbaud, the poet he most identified with, arriving in New York, journeying around, and dying of an overdose. He quickly abandoned that, though, as the project seemed to have a life of its own. As he explained in an interview to New York Native in 1990, “ I felt at that time, that I wanted it to be the last thing I did before I ended up back on the streets or died or disappeared…I’ve periodically found myself in situations that felt desperate and, in those moments, I’d feel I wanted to make certain things.”

It’s a good explanation: why did you make this? Because I wanted to.

I began by keeping lists of New York locations, present and past, that I’m attached to, an interesting exercise in itself. I lived for disco dancing in the late 1970s – still do! – so Studio 54 was a natural first choice. It’s a theatre now, only the glass doors are left with the famous logo. I took Frank there and only afterwards, reading City Poet: The Life and Times of Frank O’Hara by Brad Gooch, discovered how much he loved dance, especially the ballet, and dancing. As a former ballerina myself, I feel quietly confident in saying that Frank was a disco queen waiting to happen.

My model in the mask is my friend Brian, another serendipitous fluke, as I discovered later that David Wojnarowicz’s model (for the first swathe of pictures) was his friend Brian Butterick.

The next picture we did was on the Highline, my commute to the Chelsea Piers swimming pool. As the quote from Frank’s poem Meditations In An Emergency engraved in the railing at Battery City Park makes clear, an urban garden would have appealed to him: One need never leave the confines of New York to get all the greenery one wishes – I can’t even enjoy a blade of grass unless I know there’s a subway handy, or a record store, or some sign that people do not totally regret life.

This is the first line of O’Hara’s that I ever saw, it was a coup de foudre. But I must say that now I’m more familiar with his poems, I think it’s probably not true. He constantly wrote about the sun, the moon, trees, birds, animals, seas, beaches. He was a closet nature lover.

The synchronicities came thick and fast: he loved dogs, swimming, interior design, paintings, music, the New School. I don’t know what possessed me to take a picture of Frank sledding in Central Park but I was no longer that surprised when I found a cute childhood picture of him on a sled.

The coincidences were nice, of course, but it wasn’t the intention of my project to photograph Frank through his footsteps in New York but, rather, to insert him in mine. That was lucky, as I found out that a photographer called Clement Pascal had been commissioned by Frieze, only last year, to do exactly that. (Somewhat prosaic results: if Frank mentioned a yellow cab, Pascal photographed a yellow cab and stuck the appropriate quote on it.)

I spent a lot of time taking pictures around the Hudson River, a nod to David Wojnarowicz. The rotting piers provided cover for acres of public sex. The club where he worked at the time as a busboy, Danceteria, was raided by police in 1980 and shuttered. O’Hara’s regular hangout, the Fawn, in the West Village, was closed down in 1964 by the police as part of a citywide clean-up. Plus ca change.

It was after this particular event that Frank became an active campaigner for gay rights. He wrote to John Ashbery ‘You may be interested to know that the New York Times had a frontpage story on how New York is the world center of homosexuality, with somewhere between 100,000 and 600,000 of THEM prowling the areaways of fair Gotham. Kind of exciting, isn’t it?’ 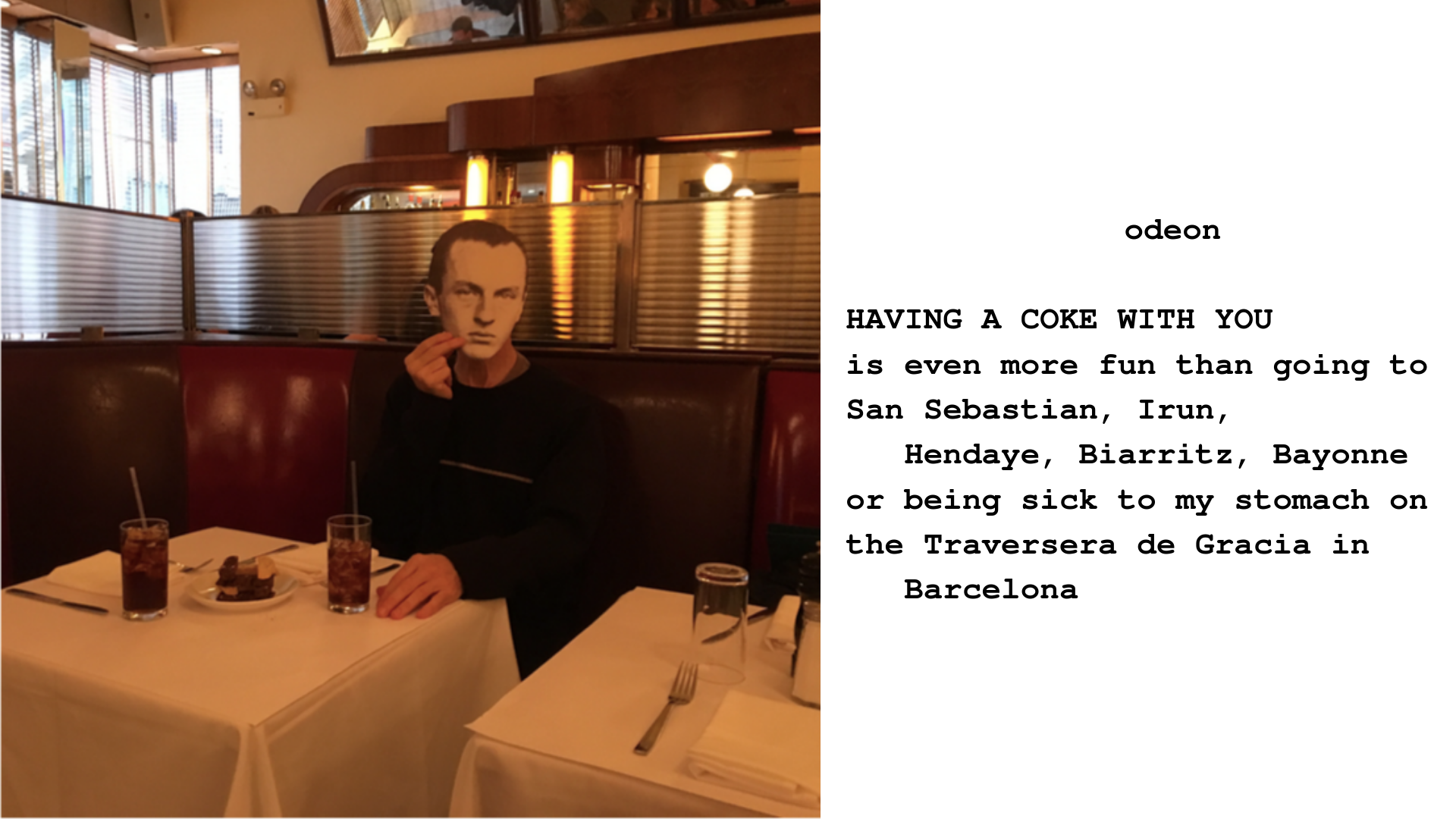 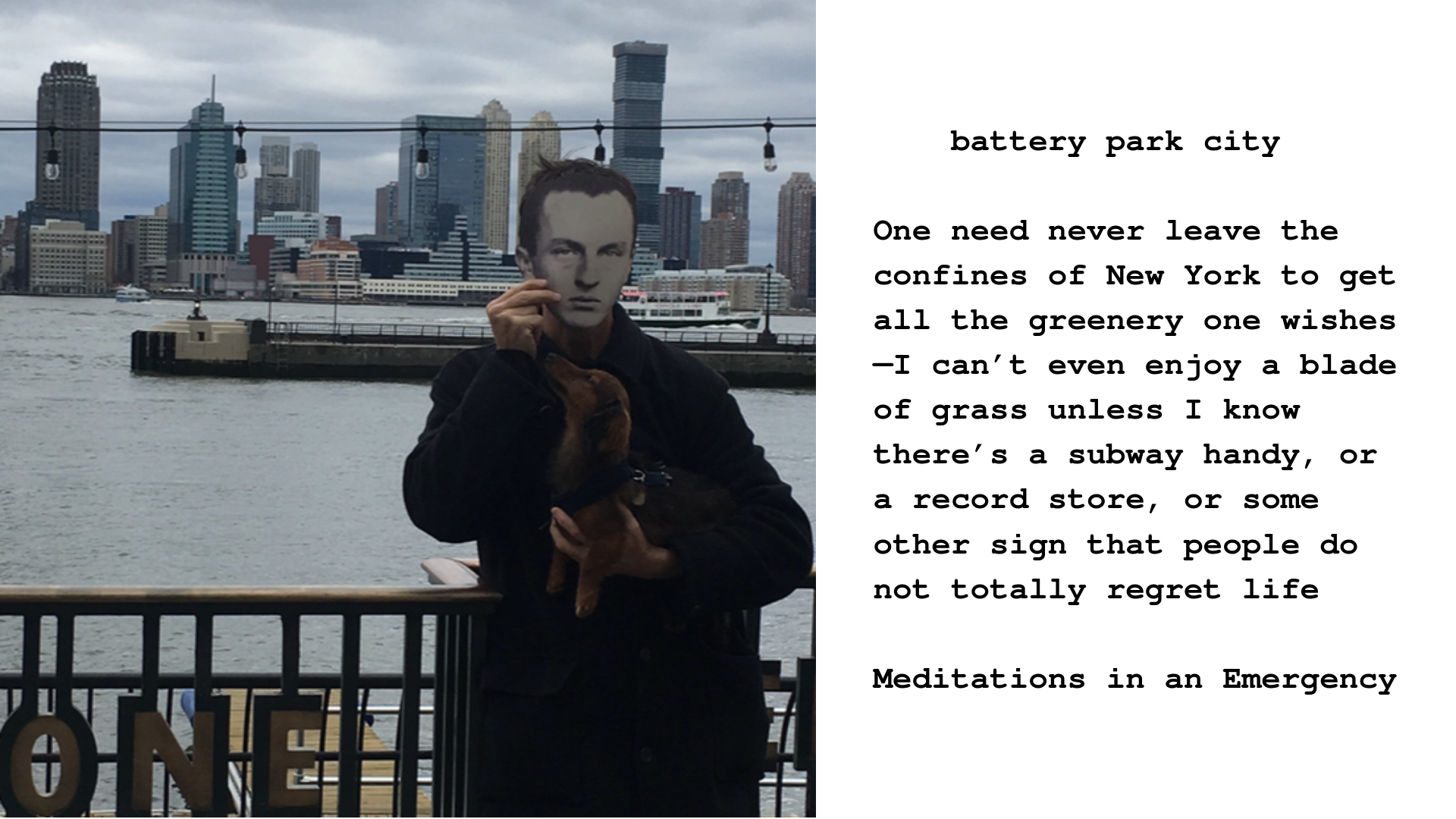 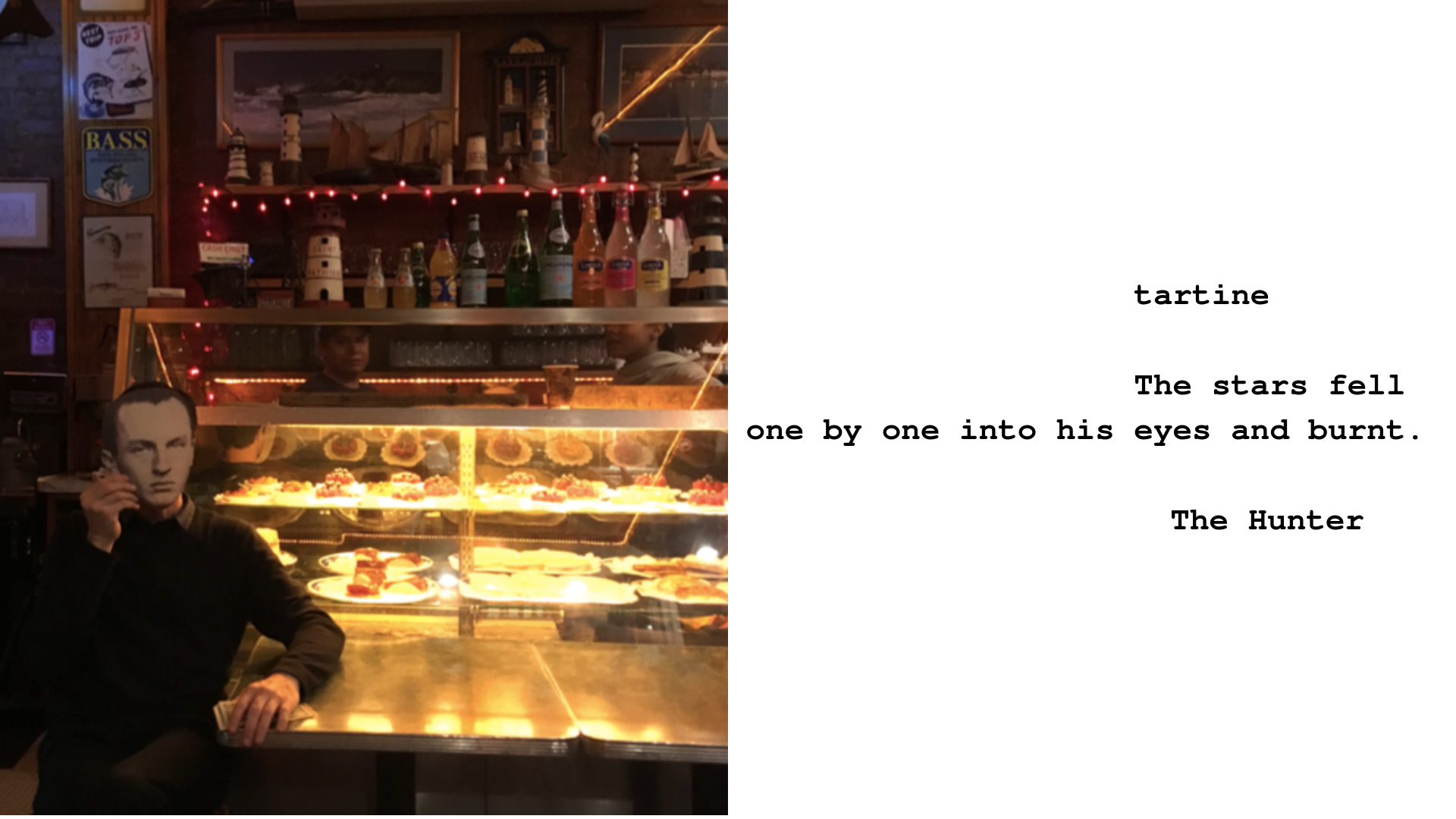 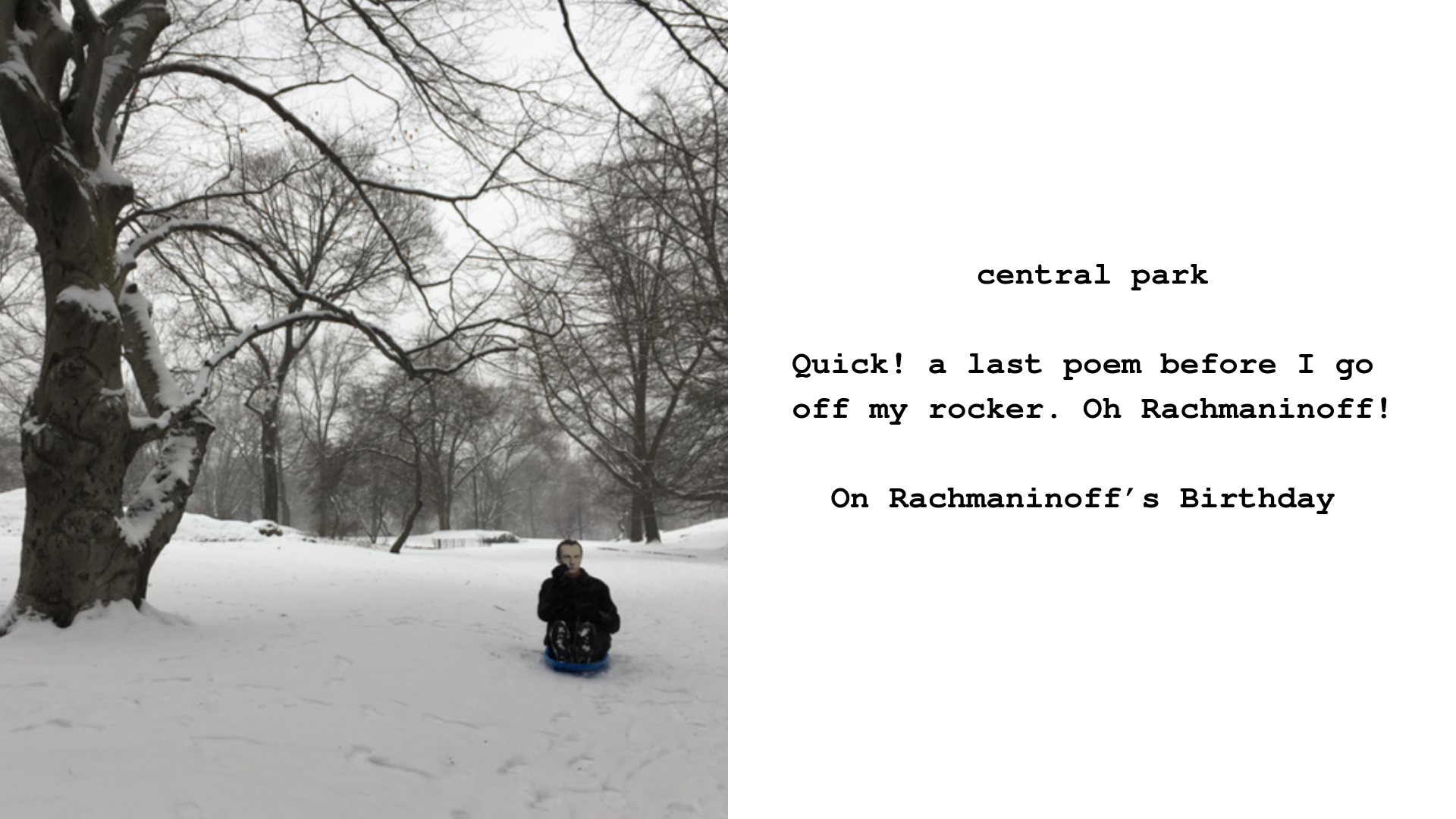 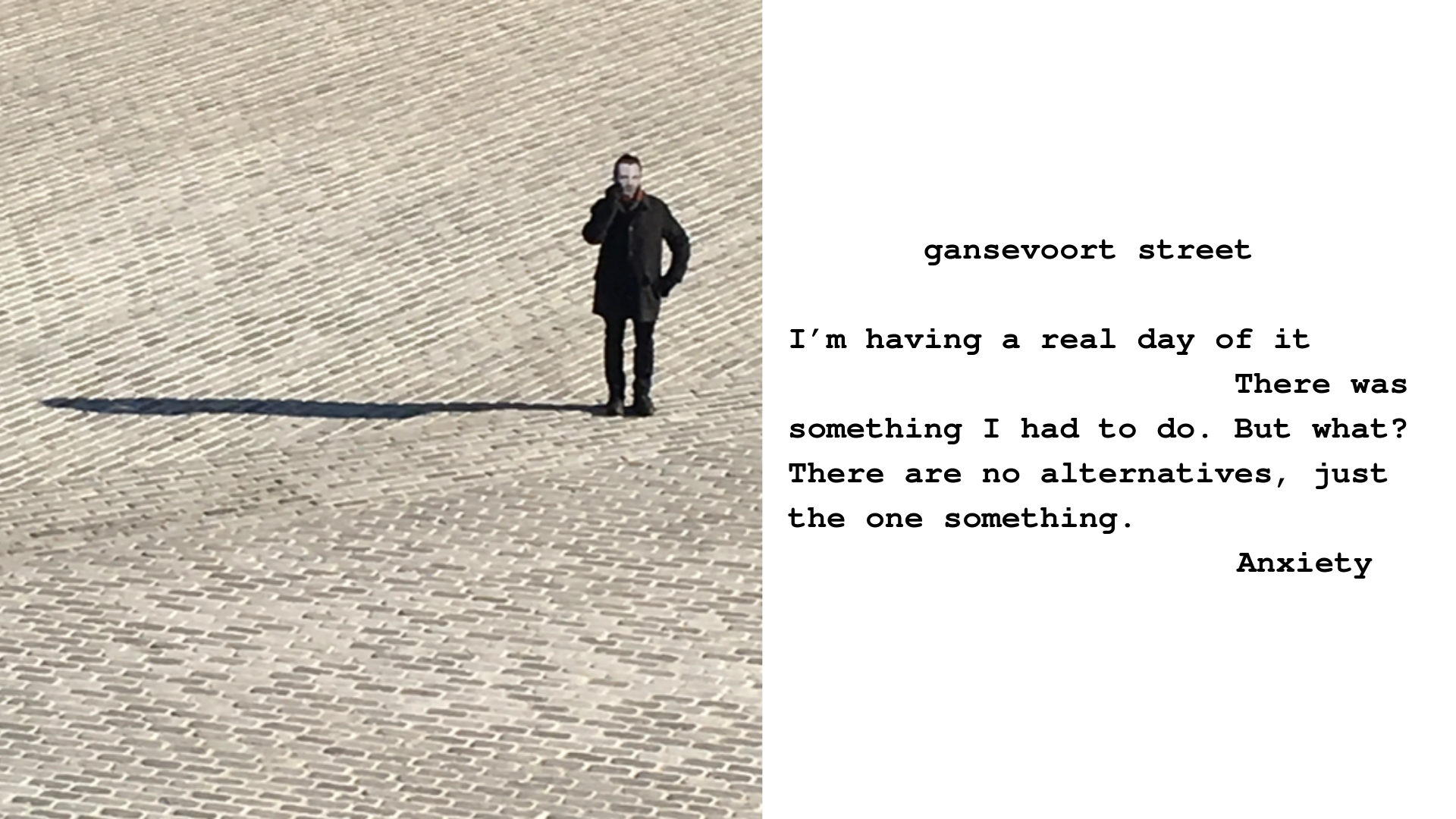 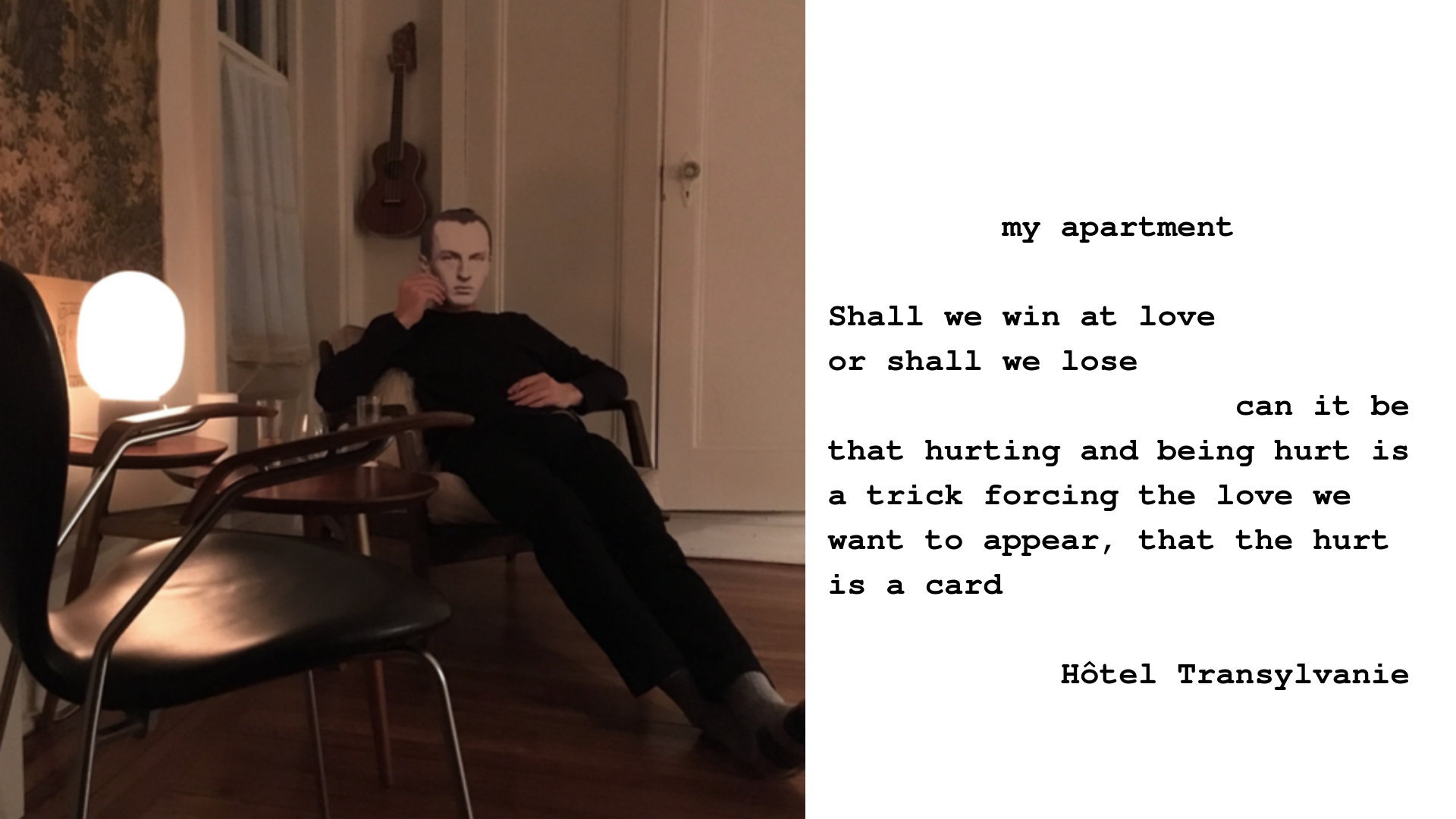 What I learned from taking my Frank O’Hara pictures – which I didn’t expect – was how striking the socioeconomic changes in the City are. The backgrounds, the things I wasn’t particularly thinking about except as locations, tell the whole story. The Hudson River Park, as it is now known, is pristine, almost paved in gold. The new Barry Diller Pier under construction is an astonishing fantasy of what untaxed wealth can buy. Lawns planted in concrete mushrooms, Mister Diller? No problem. Mature trees? Of course!

There are no shady nooks left where a gay man might go cottaging and no lofts where an actual artist could live unless they had investments. In 1965, O’Hara complained in a letter to Larry Rivers, ‘the new zoning laws are driving artists out of their lofts.’

Where broken bottles might once have lain in scattered piles along the riverfront, there is now a giant wine bottle lying on its side, ‘Private Passage’ by Malcolm Cochran. It measures 30’ x 8’6”and inside, made from super shiny sheet metal and bronze, is a replica of a stateroom from the ocean liner the Queen Mary. It’s magic.

New York was down at heal when I lived here in the 1990s. I rented a room in a flophouse on Bank Street. This 1842 Federal townhouse was worth $600,000 then, but the owner, Darwin, wanted $650,000 and couldn’t sell it. In those days, a neighbor opposite had chickens in her front garden and sometimes they crossed the road. It didn’t matter, there weren’t any Ubers.

The children played in the street when it snowed. At night, I could hear people call out ‘goodnight’from their windows, addressing all of their neighbors by name. It reminded me of The Waltons. (So much for my Dad’s fears about my move.)

There were lots of quirky boutiques and a thrift shop on the corner of Waverley Place where you could buy beautiful plates for a couple of bucks or a huge Confederate flag for $5. (I still have mine.) There was a diner around the corner on Greenwich Avenue. In my absence, the diner was replaced

by a pizzeria, Two Boots, but that has just gone, too. The landlord wants $26,000 a month for the tiny space.

Tea and Sympathy, one of the only independent food shops left, has had to set up a crowd funding page. “There’s a limit to what I can charge for a pot of tea” says the owner. It’s a shame, these places add something to the social fabric of the area that can’t be measured.

I live in the same rooming house again, it’s miraculous that it’s still here. Darwin bought the building in the late 1960s for $67,500. It must be worth $20m now. Virtually none of these West Village streets have any houses left with multiple use, they’re all what we call a Desi Resi in London – Desirable Residence – for Non-Doms – not domiciled for tax purposes.

I walk the streets at dusk, snooping in the windows before the curtains are closed. I can tell which ones have been renovated by developers from the lighting – armies of recessed downlighters – or interior designers – mid-century Modern chandeliers, and plenty of them.

When I moved back in, I saw the old lady in the house opposite sitting with her nurse on her sunny bench in the front yard. I asked her if I had misremembered about the chickens. “No” she said “I had three. They’ve gone to chicken heaven now.” She joined them last year. It’s an Airbnb now.

Most of the shops are gone – 60% + of the stores on West Fourth Street and Bleecker are dark. The only ones left are called things like L’Object where you can buy a big brass egg with a set of cutlery inside it for $3,000. Talk about niche.

Good old Hudson Street is going the same way, about 40% and counting. The nearest you will get to an artist in Chelsea is a designer t-shirt printed with spattered paint as if you have just been working in your studio. The ersatz atmosphere especially appeals to French people, the Discreet Phoniness of the Bourgoise.

Until twenty years ago Real Estate predictions were based on the movement of gay people, they always found the nicest places. Now, it’s the money people. I watch the French hedge-funder across road. He has been well advised to purchase his townhouse, it is exquisite in every detail. Even the sidewalk in front is heated so that no snow accumulates. On a sunny day, he comes out and looks at the stoop, wondering what to do next. He’s been told that it’s good to have a stoop but he can never decide whether to stand on it or sit on it – no, too dirty – so he looks at his phone forlornly for a couple of minutes and goes back inside. I tried saying hello to him once, he looked at me as if I was mad.

Cary Grant’s old house at 75 1/2 Bedford Street is only 9 feet wide. It’s rumoured to be the smallest house in New York and the second smallest house in the US. I thought it was so tiny I might be able to afford it, but no: it last sold for $2.75m in 2013. Naturally, no-one seems to actually live in it.

Edna St. Vincent Millay lived there too – there is a commemorative plaque – and she coined the phrase ‘my candle burns at both ends.’ Frank should have liked that, it’s very Frank, but, alas, I can find no record.

The new, improved, property taxes will drive the remaining old residents out soon, their days are numbered. An anonymous lady on Charles Street, quoted in the West View News, said she received an appraisal from the city in January that claimed her property had risen in value by 67% over the last year.

Frank O’Hara always wanted to be rich. I can picture him, alive and well, living in a charming house on West 12th Street. And why not? He’d know what a stoop is for: he’d be sitting there in the sun, smoking, chatting waspishly to anyone who walked by, typing notes for poems into his iphone, and laughing. Always laughing.

‘make my lines thin as ice, then swell like pythons’ he wrote. You did, Frank, and they do. 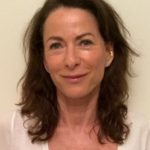 Sally Ann Lasson is from London where she worked as a strip cartoonist for 25 years and has published 12 books of cartoons and illustrations, most recently The White Umbrella by Brian Sewell (published in the US 2017.) She is an MFA student at the New School where she is writing her first novel.