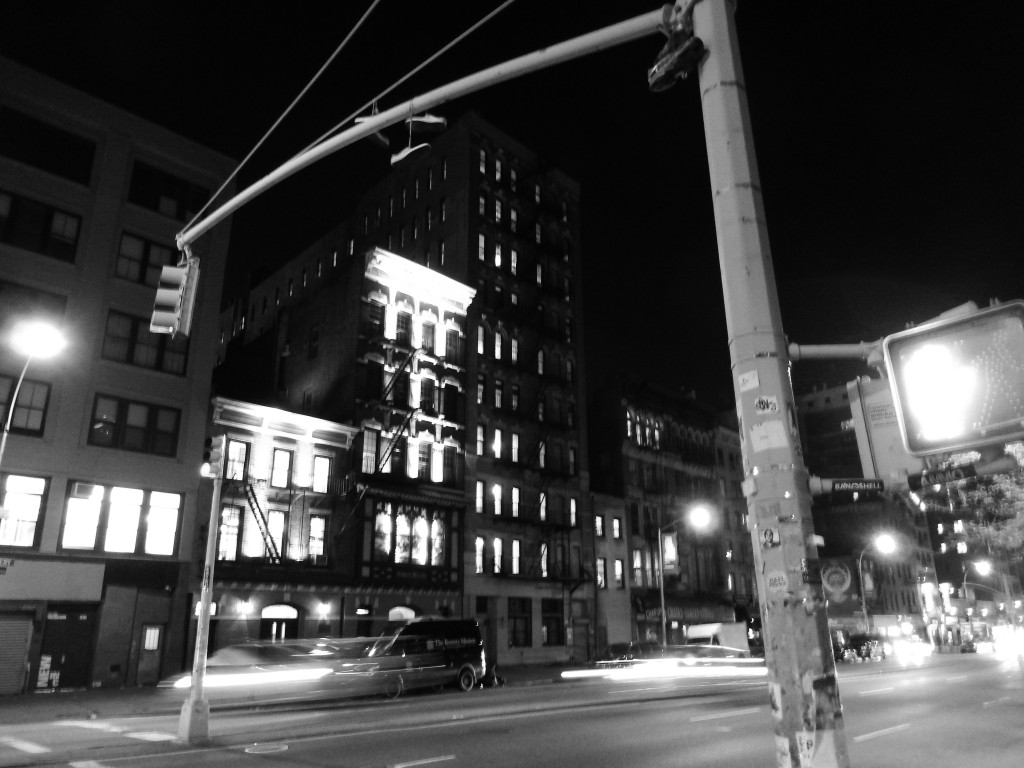 Eliza Newman dropped me a line. She was visiting New York.

“Your timing couldn’t be better,” I answered. “We’re shooting the book trailer for All the Lonely Boys in New York that night.” Then I sent a quick list of sites to explore, suggesting she start at Ground Zero. “That’s hallowed ground for me as a writer,” I explained. “Sets a mood. Then you have to climb out of the dark.”

“Don’t leave the city without us grabbing coffee,” I added.

I was excited to talk about our virtual collaboration in person and to make our friendship “real.” Eliza first submitted her poetry to Monologging.org over the summer. Since then, she has covered the L.A. art scene, reporting on gallery openings and critiquing shows.

The last few months have been all about making monologging.org connections, as well as my fiction, real. I’ve been working with director and filmmaker, Dan Slottje since the summer, to write a script for the trailer, organize props and equipment. Dan had enlisted the actor, Ben Rezendes, to read lines from the book and portray a spooked, unnamed terrorist. His character delivers a bomb to Times Square by bicycle on the night of March 6th, 2008, the evening my book takes place. I’d already heard the recordings of Ben reading, but the mild January day I set out to meet Eliza, and film the trailer, would be my first meeting with a character I’d created.

Eliza was waiting for me downstairs at the Empire State Building. She’d saved a table for us at Starbucks.

I had brought the first proof of my novel along. I was excited to show Eliza the illustrations by Diana Muller and outline all of the events we are planning to accompany the launch. Eliza, likewise, had a story to show me.

Boy, my mind was busy. That dirty song was stuck in my head, and it wasn’t even dark yet…”

-All the Lonely Boys in New York, By Jeffrey F. Barken

Even as the winds howled and rain seeped in through the holes in the roof, we were warm beneath the blanket…”

I could tell Eliza was in character. She’d wandered New York all weekend, “soaking up,” as Garp says in Irving’s novel. Her imagination, however, was way out west, conjuring a stormy night story based on the famous 2006, Hanukah Eve Windstorm that blitzed Olympia, Washington.

“Sounds like your characters are all tucked in,” I told her, envying the warm scene she’d depicted.

Next, we got talking about experimental writing. I told Eliza about the new, interactive writing games I’m hosting on Monologging.org with the help of poet, Patrick Milian, and fiction author Diana Mumford : #Bite and #FlashTag. The former category prompts writers to produce a weekly, one-two line twitter-ready response to a given prompt. The latter invites multiple writers to share the process of writing a collaborative flash story in response to a picture and first line, all published over the course of a week.

Flipping through the pages of my proof copy of All the Lonely Boys, I explained my evolving vision for Monologging.org: “Books have only one entry point,” I said. “Imagine a publication with unlimited portals, actively existing in a fictive realm. I want authors to launch their characters here, or fill in the backstory for their published works. We should use the platform to connect everything we’re creating, even merge stories so that characters from one writer’s imagination can interact with another’s…”

That’s a coffee buzz tangent for you. I was ripped, ready to power through a long day of work and an all night trailer shoot. “Here’s to future collaborations,” I think we said, toasting empty paper cups before we parted.

Back upstairs in the “Crow’s Nest,” I knew there’d be time to kill after work, so I sent Wesley Burdett a line.

“Meet me downtown to pick up this dog I’m watching,” he replied.

That was the perfect set-up to slip back into my old character, Myles Fletcher. I owe Wes the setting for All the Lonely Boys in New York. Back in 2008, when I was down and out, I spent almost six months crashing on his couch. The Upper East Side Apartment where we lived together, struggling through the darkest days of the Credit Crisis, inspired me to imagine a fictional meeting house where soldiers and anarchists discuss their opposition to the Iraq War. Eventually, my characters plot the still unsolved terrorist attack on the Army Recruitment Center in Times Square.

Wes and I caught a happy hour in the West Village before zipping down to the Financial District to pick up the dog he was watching.

“I’m off to China again for work,” Wes told me about his latest freelance lighting design project.

Cheers to China. Cheers to filming the trailer. We talked about our craving for creative space, and what claustrophobia in New York does to one’s imagination… Cheers. Cheers again, till our glasses were empty. Then we paid and hopped a train.

Damn, that whippet was hyper. We let the dog mark every sidewalk as we walked uptown past Ground Zero, the very soulful stretch I’d suggested Eliza trek. I realized that was the closest I’d been to the Freedom Tower since I moved back to New York. Amazing how a symbol evolves… By the time I arrived at the rendezvous point on 63rd and York, Dan and Ben were waiting with the bike and camera.

“Lee told me what twists and turns his mind had taken as he rode his bicycle downtown,” I recited a line from the book as I shook hands with Ben. We were trading characters…

Click here to read the first entry in this series: Empire State Days